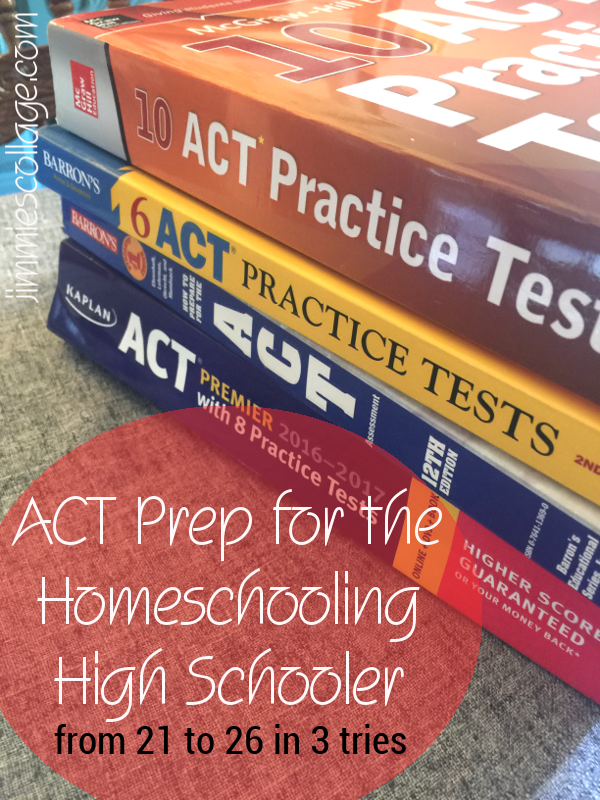 I was one of those kids in high school who always finished the test first and scored one of the highest grades in the class. Yes, I had good grades, but who cares? Once you get into college with those grades, having a high GPA or being able to take tests doesn’t cross over into any practical life skills or career skills. All it means is that I think the way that schools tend to measure. So I perform well on tests. End of story.

Getting the Test Taking Mindset

But as I’m always telling my daughter Emma, tests are a hoop that we have to jump through. When she gets frustrated with the absurdity of a four-hour test’s determining her higher education plan, I use a phrase I created when we lived with the infuriating bureaucracy of China and of our own sending organization, “Imagine a hoop. Now picture yourself jumping through it. That’s all it is. You can do it.”

We’ve done a lot of hoop visualization with ACT prep, and Emma has been a real trooper, demonstrating true determination and perseverance.

We’ve also discussed what a hard task colleges have in terms of admitting students and assigning those precious scholarship dollars. They need an easy to apply, objective measure. And that’s where the test comes in. I have to say that I admire Emma’s attitude. She doesn’t waste energy, raging against the system. She accepts the way the system works, flaws and all, and works to mold herself to it. (I tell you, that is a life skill she will use again!)

If you’ve got a teen who needs to take the ACT, work on mindset. Acknowledge the unfairness but see it as a obstacle that can be overcome. Focus on the end goal. If your teen isn’t motivated, realize that you’ve got a hard, uphill journey. The push to do well has to come internally from the student instead of externally from you. Through this process, I was a cheerleader, a financial backer, and a coach. But she put in the hard work of studying because she is excited to go to college.

Emma is not a natural test taker. She’s slow. Not mentally slow but clock slow. She needs time to work through passages, questions, and math problems. She has always been this way. She’s not a dawdler; she simply needs more time. But the ACT is a timed test that doesn’t accommodate for kids like Emma.

She’s also a creative thinker. While a logical, linear, literal thinker like me looks at a question and knows immediately what the question is asking and what the answer is, Emma understands the questions in multiple interpretations and can imagine how more than one answer could work. Sadly, a standardized test doesn’t reward creative people.

For a blast from the past, here’s Emma’s response to a math question at age 9. It’s a great example of how she reads test questions.

We are looking at various state schools in Tennessee, and they have varying minimum ACT scores for the automatic scholarships. For example, her score of a 26 puts her in the second tier at Middle Tennessee State University, earning $3,000 per year. That’s a full one thousand dollars more than what the college offers someone with a score of 25! Every point matters. She needs a 28 to get an automatic scholarship at the University of Tennessee Knoxville, though.

It probably goes without saying that you must plan to take the ACT multiple times. But it goes farther than that. Consider the first time a trial run. It doesn’t even count. It’s a baseline so you know where you are starting, nothing more. That first time is when kids understand exactly what the environment will be like (maybe a loud, ticking clock or annoying proctors who are snacking or chatting in the halls) and how the test feels. They get a sense for the time constraints, what to take to the test (a sweater and hand-held pencil sharpener), and the self-doubt.

It’s easier the second and third time because it’s more familiar. For our homeschooled kids, the stress of taking a standardized test in a sterile classroom is even more shocking. So we need to give them multiple times to practice. Yes, Emma will be taking the ACT once more in the fall.

This kind of thinking was foreign to me. I took the ACT once back in 1987 and scored enough for a full scholarship to a private college. I don’t remember studying for the test or even looking at sample tests. The only thing I remember is the repeated admonition not to leave any question unanswered. (And I remember the coach who was the proctor, sitting a table near me, noisily turning pages in his newspaper and munching on crackers. Yes, I’m still bitter about that all these years later.) Taking the ACT with Emma has been similar to a competitive sport with strategy, purchases, training sessions, and high stakes!

On this matter, Emma says,

It’s never too early to start. I wish I had taken a practice test or two back in my freshman or sophomore year so I could have already gained a familiarity with the test and known what type of math to focus on. The ACT kind of creeps up on you, and suddenly there’s a ton of pressure to get an amazing score to get scholarships!

Buy and use study guides

It’s best to practice with a variety of books. I don’t have it, but everyone says you should also buy the official ACT practice book. 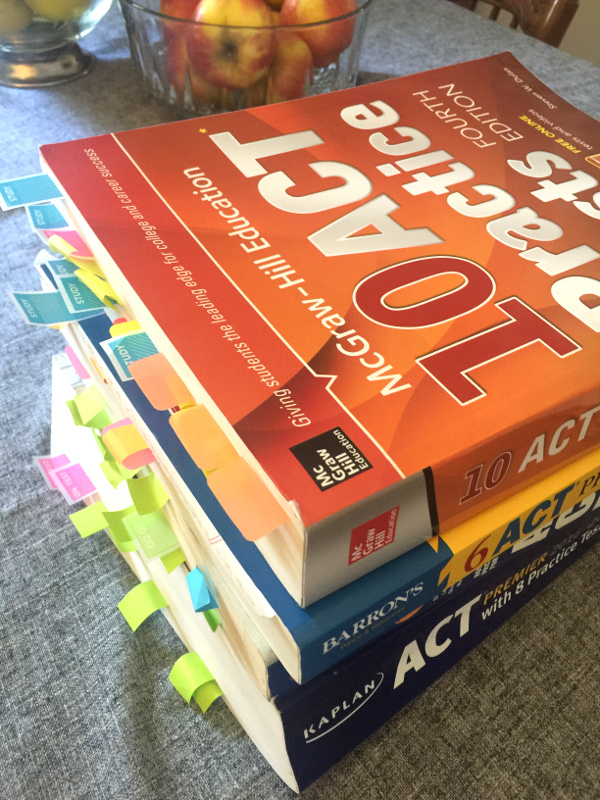 Here are the books Emma used plus notes based on her research and own experience. (Links are affiliate links. Be sure to select the most up to date version of the books linked.)

Emma did the majority of her test prep alone with these guides. Sometimes she met a friend at a local Barnes and Noble bookstore for joint study sessions where they worked side by side and then took breaks to chat and get coffees or teas.

Of course, she needed other tools like highlighters and Post-it flags which she used quite liberally!

My daughter may be the messy artist type, but when something matters to her, she can be intensely organized! She attacked her second and third ACT tests like an athlete training for competition, laying out a schedule of exactly what she needed to do each week as she worked through the practice test in the books above.

She had elaborate records of each practice test she took, trying different methods to see how they affected her scores and tracking progress to motivate herself. She would work like mad and then stop when she realized she was burned out and not improving any more. She even scheduled down days when she didn’t think about the ACT at all. 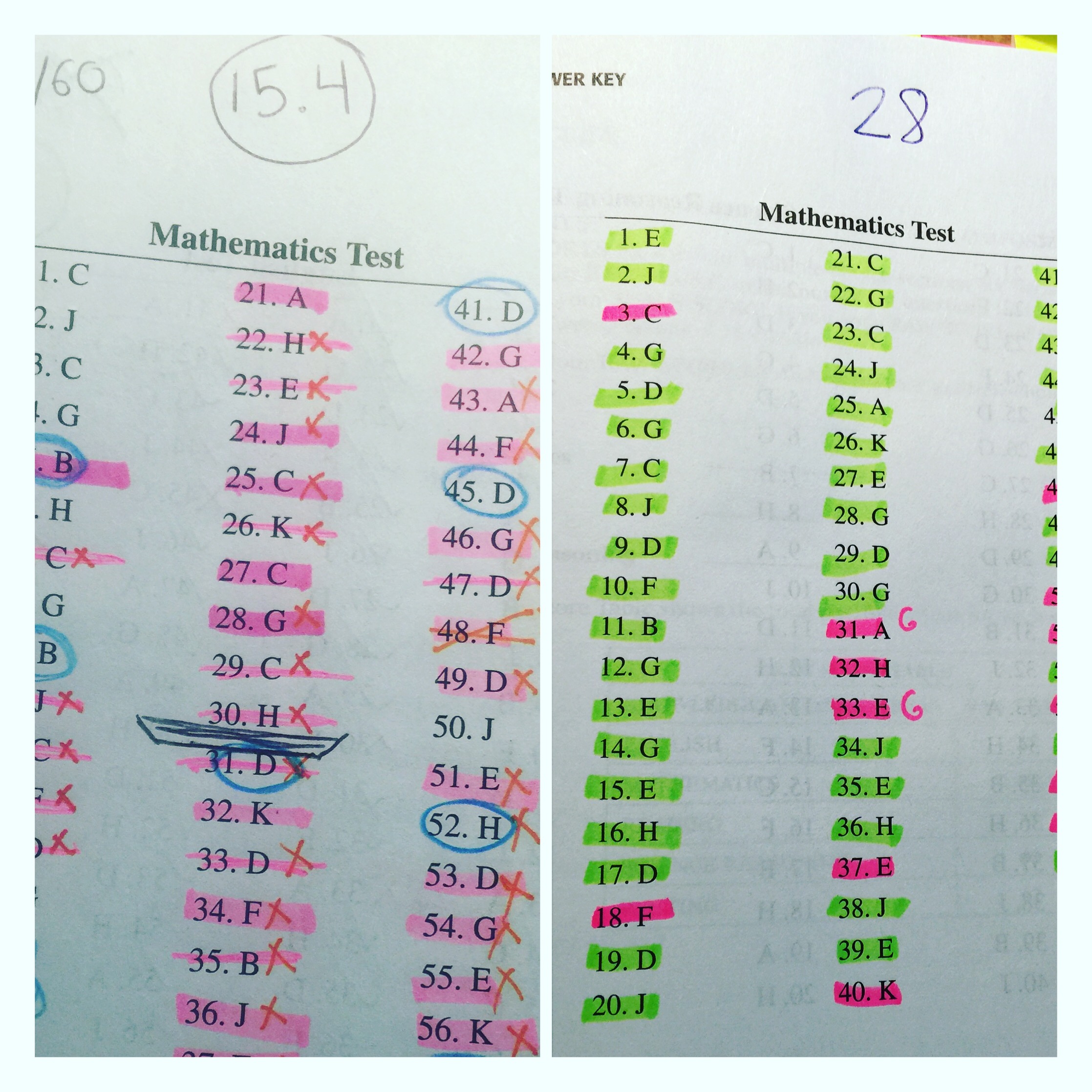 To say I am proud of her is an understatement. Through it all, I reassured her that I valued her hard work and knew that whatever her scores turned out to be, I knew that she was taking this seriously and giving it her all.

There’s no substitute for having someone to answer questions, provide positive feedback, and keep you accountable. So to prepare for that third ACT, I hired a tutor for Emma.

I started with a simple Google search, looking for ACT tutors and prep courses in my city. Then I started digging, looking at websites, sending out emails, and making phone calls. I put some options in front of Emma, and we discussed timing, setting, and costs. At the end, she chose to go with one-on-one tutoring instead of a small class environment.

I hired a tutor via WyzAnt. Yes, it was expensive at $60 per hour. In all, I spent $880 for seven weekly sessions lasting 2 to 2.5 hours each. But the payoff is worth it. Before the tutoring, Emma was at an ACT score of 23 and not eligible for scholarships at any state schools. By scoring a 26 after the tutoring, she put herself in the $3,000 a year bracket at at least one school. So my money was a great investment.

Use my referral link to WyzAnt to get $40 in free tutoring. Of course, you’ve got to hunt for the perfect fit for your teen. Emma’s tutor was open about her own academic struggles, and that seemed to encourage Emma in ways I never could. She was instrumental in helping Emma set and reach high goals for her math and science scores. Plus she offered a lot of tips that really worked for Emma — sometimes going against traditional advice that Emma had read in the books, but things that worked for the way she thinks.

Although I wasn’t thrilled with paying $800 on a tutor when I’d earmarked that money for a hot water heater, it turned out to be a smart gamble in our case.

I hope to come back and update this post in the fall with a note of an even higher ACT score for her fourth try! Her ultimate goal is the 28 needed for automatic scholarships at University of TN Knoxville.