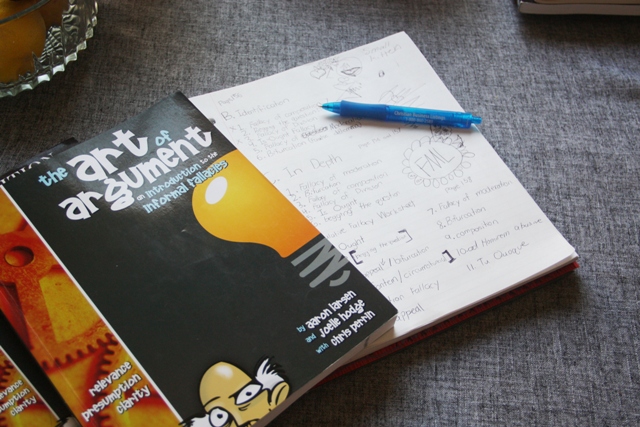 This post does contain Amazon affiliate links, but I don’t have any special relationship with Classical Academic Press other than being a happy customer.

I’m a sucker for elective courses that are important but don’t fit neatly into a label of history or language arts. The Art of Argument is a perfect example. Logical fallacies? What kind of thing is that to study?

My husband loves philosophy, and we  have heard him talk about straw man arguments, ad hominem attacks, and equivocation. After going through The Art of Argument, now we know exactly what those mean!

I bought The Art of Argument (student book and teacher’s guide) by Classical Academic Press at the Great Homeschool Convention in Memphis in 2012. We used it this last semester of eighth grade as a study in logical argumentation.

About Art of Argument Curriculum

The teacher’s guide has all the answers to the discussion questions, chapter reviews, and cumulative reviews. The front and back inside covers have handy lists of all the different fallacies covered in the course. That chart was invaluable to us as we did the chapter reviews, and I loved that both teacher’s guide and student book had that same chart.

These fallacies have fancy names (often in Latin), and having a concise reference helped us to learn the distinctions between very similar types of arguments.

A huge plus of the book is the ample use of examples of the fallacies. Not only are there text examples that are fully explained, but there are also contrived advertisements, often very humorous or ridiculous, which drive home the points. With the combination of my reading aloud and the visual aids, this curriculum was a good fit for Emma’s learning style. And I have to admit, I really enjoyed learning the technical names of arguments that intuitively seemed wrong to me.

I didn’t make it a formal study with lots of writing. We typically did the exercises aloud instead of writing them down. I wanted the material to be more of a life skill course than an academic one. That may seem ironic since the logical fallacies suit a rigorous classical educator. But on my part, I see the fallacies as practical life skills.

The book is a bit wordy. Sometimes I simplified the explanations to state more concisely what the authors rambled around to say. I guess I prefer a more direct style of communication. In my opinion, the authors sometimes used too much repetition and too many words to get their points across.

The Art of Argument as Life Skills

Defending the faith will probably be a large part of Emma’s future, so understanding how to argue with precision and logic will be an important ability. (Note that argue does not mean quarrel but to convincingly state a position. You could also use the synonyms discuss or debate.)

With so much propaganda surrounding us online, on television, and in print, it is critical that we recognize how we may be duped or misled by faulty arguments. One of the highlights of this course was hearing Emma identify fallacies from other places — conversations at church, television commercials, at The Creation Museum, and in books.

We did a study of advertising in sixth grade, but The Art of Argument takes those basic ideas to a much deeper level. Eighth grade is a perfect time for such a study as she has the maturity and experience to understand the examples in the book and then identify them in real life.

Knowing the right and wrong ways to argue can only help Emma’s overall communication skills. This is one of her strengths already, and The Art of Argument made her an stronger communicator by labeling logical arguments.

A Peek into our Latest with Winter Promise
Looking for an American History Curriculum?
Homeschool Programming Curriculum