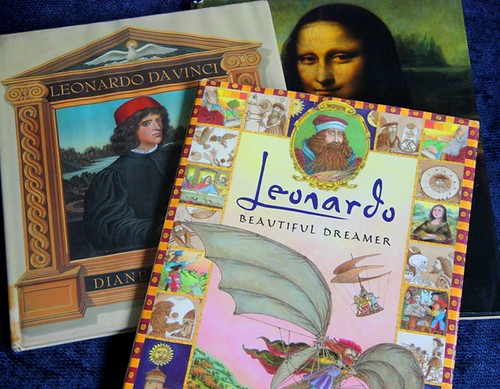 In our math history lessons (from Livingmath.net) we have finally reached the Renaissance. The focus is on Leonardo Da Vinci, a cross-curricular topic if one ever existed. Is he an artist, an astronomer, a mathematician, or an inventor? Of course, he is all of those, and that’s what makes a study of him so fascinating. We can veer off onto lots of tangents and make application to many different disciplines.

At the recommendation from the Livingmath.net book lists, I bought Leonardo: Beautiful Dreamer

by Robert Byrd. Yes, it is a picture book. But it’s not an “easy” book. It’s an oversized, visually appealing overview of Leonardo that is full of narrative, quotes, tidbits, and anecdotes. And of course, all through the book there are beautifully detailed illustrations. Each two page spread focuses on one aspect of Da Vinci’s studies or an event in his life.

, so when I made my shopping list, I wondered if I really needed another Da Vinci picture book. But I am so glad I bought this one. The detailed illustrations and the extra details really bring Da Vinci to life with a very engaging style.

When I read the article Picture Books No Longer a Staple for Children, I was especially glad I did my part to keep picture books in print. People who think that picture books are not mentally stimulating are not using books like  Leonardo: Beautiful Dreamer

as a standard. Or maybe as soon as they see illustrations, they discount the book as juvenile without actually reading it.  Absolutely wrong. Leonardo: Beautiful Dreamer is the perfect example of a picture book for all ages. The illustrations help you understand the text which is full of complex scientific concepts.

We read this meaty picture book over the course of two weeks, reading two to three 2-page spreads daily.

Da Vinci was a journaler; he kept notebooks with his sketches. I encouraged Sprite to keep journaling and sketching because that is what many artists and writers and inventors do as habit.

Because there is so much to learn about Da Vinci, I asked Sprite to choose just two topics to narrate in writing. She chose Da Vinci’s pranks and his interest in flight. 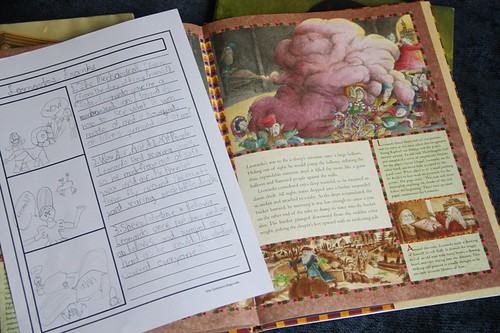 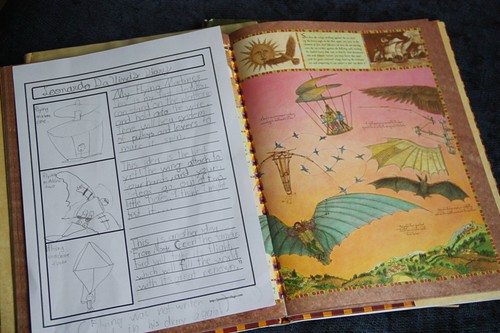 I made some notebooking pages for Sprite. When selecting which ones to print, she said, “I like this one, but can you take off the picture? I want to draw my own.” This is why we mostly use blank notebooking pages.  (Get some on my Freebies page.) 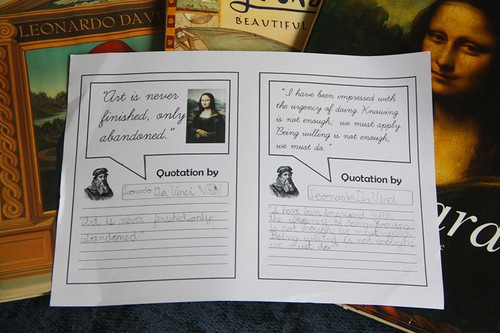 Of course the Metropolitan Museum of Art calendar had one page by Da Vinci. Now that the year is at its end, it’s fun to be able to shuffle the pages and look for various styles of art or artists. 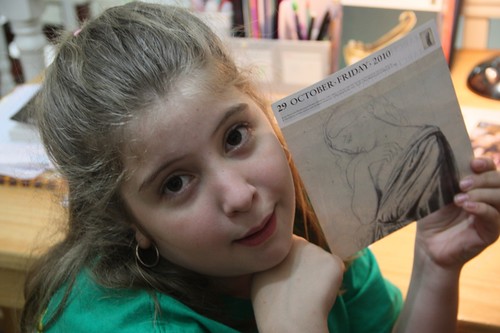 I also read The Second Mrs. Gioconda aloud to Sprite. The book was humorous and included a lot of history about Da Vinci. But I recommend this book with some reservations. There are adult themes of  marital infidelity in the story. It’s never stated explicitly that Il Moro, Ludovico (Leonardo’s patron) is having affairs, but it does mention his first “love” before his wife and then his new “love” after the interest in his wife fades. I found that inclusion very disturbing. Worse, the element of the second lover during his marriage is essential to the plot as it explains some of his wife’s behavior. It’s not the kind of thing you could just skip over.