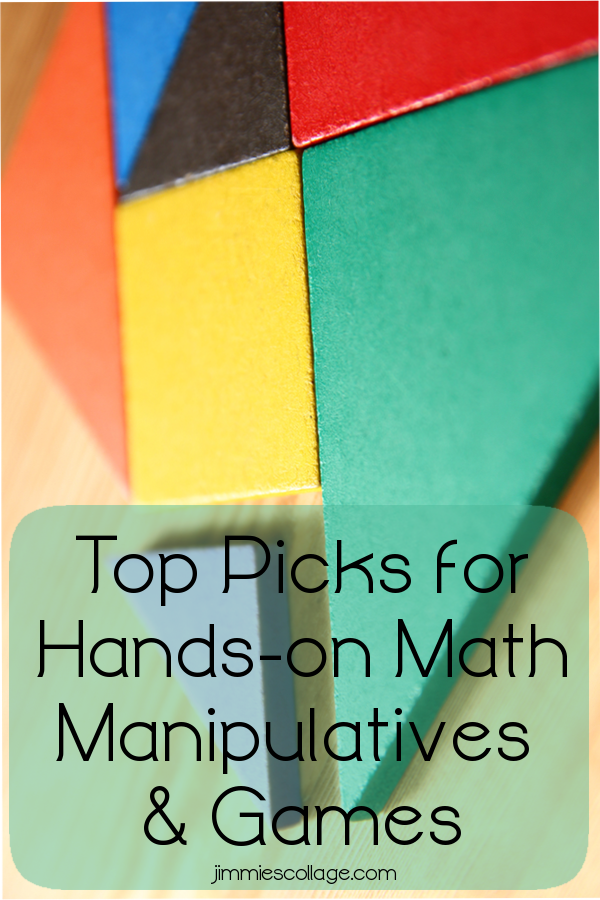 Just like you build a library of living books, a homeschool should have a library of hands-on math and science tools. On my post about setting the manipulatives free, Melissa asked what math tools and games I recommend. So here is my list of ten things that we had on the shelf and that we turned to again and again.

Dominoes are great for matching, for visually understanding number, and for creating rally tracks. Okay, the rally races fall into physics more than math, but that is important too.

because they are lighter and quieter than the heavy, almost stone-like, plastic ones that tend to come in tins.

See these domino ideas from Mathwire and from NRICH.

Normal playing cards have so many uses in math lessons and play. I found that using cards for the numbers in a math problem instead of numbers on a sheet of paper instantly made the math fun.  The same problem with cards is suddenly a game. Use that to your advantage.

Raid your board games or pick these up at thrift stores. Dice work the same as cards. Numbers on paper can cause tears, but somehow rolling that same number on a little cube is enjoyable.

Worried about losing dice during a game? Look at this wonderful suggestion for how to roll two or more dice and still keep them close by. No more fishing under furniture for stray dice. Or use jumbo sized dice to make your game more of a whole body sport.

Pattern blocks are not just for preschoolers. Elementary aged students can use these to experiment with geometry and to hone visual spatial skills. Some children like having a design to match with the blocks while other children prefer more open-ended play, creating their own patterns and pictures. You can even create stop motion animation with pattern blocks!

Again, I prefer the feel of the wooden blocks, but you may like the texture of plastic instead. 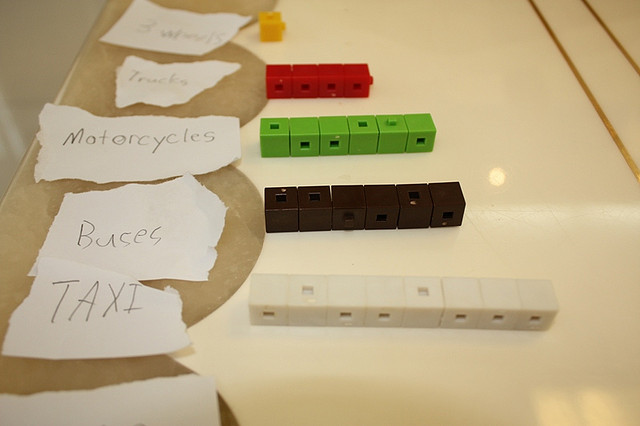 Number cubes keep things concrete which is exactly what early math learners need. It’s easy to see what four means when seeing and touching four linked blocks. Let children do their math problems with blocks instead of forcing them to switch to abstract mental math too soon. How soon it too soon? When they are ready to stop using the blocks, they will simply not use them any more.

Some number cubes link together and others do not. If you have the non-linking kind, you can simply stack or line them up.

Although you can find lots of 100 charts for free online, you are going to want to laminate one or print multiple copies. Note that 100 charts can begin at zero or one. Both work, but you may want a certain layout for different math activities.

7. counting bears or other counting tokens

The idea here is even more basic than the number cubes. Although these aren’t designed to represent ones, tens, and hundreds, the physical objects give numbers a concrete representation. We used counting bears, translucent discs, and household counters such as beans or coins. These counting tokens double as BINGO markers and game pieces too. They are often used in combination with a 100 chart.

Tangrams are similar to pattern blocks, but there are seven shapes that create a square instead of a huge set of hundreds of pieces. The advantage of a set of tans is that they are more affordable. You can still make dozens of designs with the seven simple shapes, and tangram activities are great for older learners who have moved past pattern blocks. 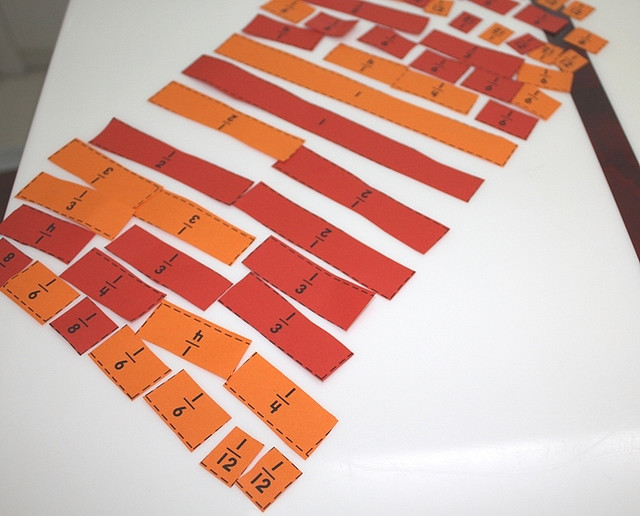 Fractions can be very challenging for children to understand unless they are made visual. With the help of fraction bars or fraction circles/wedges, the concepts behind the rules for adding, subtracting, multiplying, and dividing fractions become apparent.

The child may learn the multiplication-table and do a subtraction sum without any insight into the rationale of either. He may even become a good arithmetician, applying rules aptly, without seeing the reason of them; but arithmetic becomes an elementary mathematical training only in so far as the reason why of every process is clear to the child.

Instead of merely teaching the rules of how to work with fractions, use the manipulatives to demonstrate the commonsense reasons behind the rules. Then children will truly grasp fractions.

A balance scale is a fun way for children to experiment with comparing, adding, subtracting, estimating, etc. You really won’t need to devise activities. Just let your kids lose with a balance, and they will create their own fun that is simultaneously teaching.

Building a math manipuative library can be expensive, and although I consider all of these tools worthy investments, sometimes the budget doesn’t allow for the pricier items. So be creative with homemade, repurposed, or household manipulatives. Substitute beans, or pennies for the counting tokens. With craft sticks you can create your own number “cubes.” And index cards or even paper can serve as a base for homemade dominoes or cards. Or use free printables.

One of the advantages of making your own is that you can get the kids involved, and then the creation of the manipulatives becomes another learning opportunity. Of course, the disadvantage is that they normally aren’t as durable as something you buy.

With these ten things on your shelf, it’s easy to find a fun resource for almost any math lesson you have.  And I also encourage you to let your children play with the manipulatives outside of school time. Plenty of learning happens during play. So don’t save them only for lessons. Get your money’s worth out of them. Use them!

This post is featured on The Massive Guide for Homeschooling Math. Click to see more great math posts. 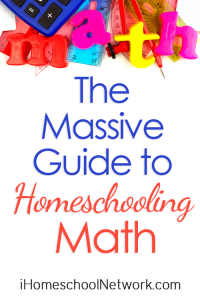