I’ve got a math confession to make. My ten year old, fifth grade daughter does not know her multiplication facts. And that may be partly my own fault. I never pressed her to memorize them. I kept hoping that it would click and she would just know them. But there’s no clicking yet. In fact, even some of the more “easy” math facts still give her problems. 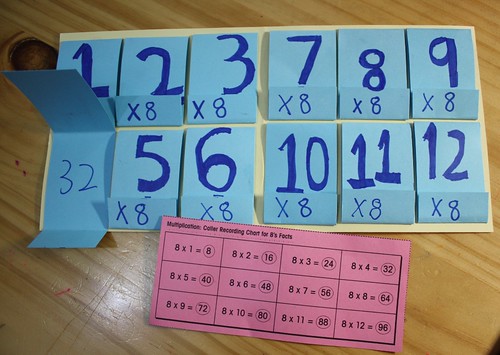 I thought it was like so many other things — potty training and  reading, for example. The child has got to be ready or the teaching just won’t “take.” I still think that, and I’m not stressed about the times tables, but her lack of fluency is having a negative impact on our math studies. Sprite gets so bogged down in 7×6 that she forgets the broader point of the word problem we’re working on.

When Sprite was tested in the spring, her computation (called numerical operations) score was a full two grades lower than her math reasoning. I felt good about it, actually, since her computation score was right on grade level. I know better than to hold back on the advanced math reasoning just because arithmetic skills are lagging. We just do both side by side, stretching her mind with tough math ideas as we drill the basics.

So with all that said, one of my goals for math right now is the multiplication facts. She’s got to master these! (Prayers, ideas, links, and advice are all welcome!) I’ve got to come up with some sort of system with lots and lots of review, something like Spelling Power for multiplication.

This week we worked on x8 and x9, some of the tougher ones. We played a game from the wonderful, free materials at Public Schools of NC Mathematics Instructional Resources. There’s a x8 game in this section —

(It still amazes me how playing a game makes Sprite excited to do math. She never says, “Aww.. this is just a sneaky way to get me to practice my x8 facts!”)

Also, I gave her a x8 math facts chart for reference and told her she had to make her own minibook reference. Sprite chose lots of small matchbooks inside a single fold.

That day, she could call out all the x8 math facts. Victory! Two days later, most of it was forgotten. Sigh… It’s going to take a lot more than a single lesson to master these facts.

Living Math with Factors, Multiples, and Primes
Set the Manipulatives Free
How to Build a Straw Tower: Homeschool STEM Project