More of our quest to master the multiplication facts! This time we’re working on times nine.

(It seems to me that being able to sprawl on the floor to work on a project is a huge benefit of homeschooling! Do you use the floor a lot like we do?) 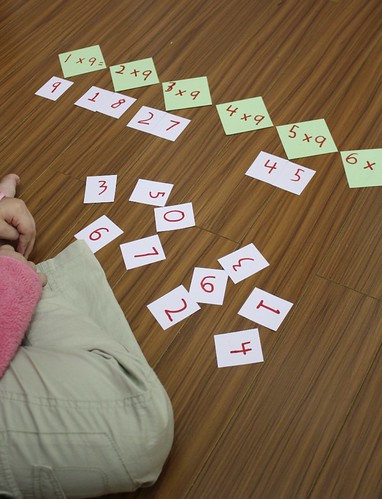 Basically my strategy for x9 was to help Sprite see the pattern in the products by actually placing the digits in their correct spots. I’ve shown her this before, but somehow it didn’t seem to help her solve the x9 facts. Maybe she needs to discover it on her own. That’s far superior to my telling her.

So I set up the situation for her to discover the patterns in the x9 facts. I cut out ten green squares for the problems, and then twenty smaller cards with 2 each of the numbers 0-9. (Sprite did the writing,  of course.)

It amazes me that in all my years of schooling, I don’t remember any teacher telling me about the trick for the x9 facts. And I wasn’t sharp enough to see it myself, I guess.

After the hands-on activity, she did describe some patterns! And she seemed to “own” them better than when I’d simply pointed them out. I could see her face light up with discovery and with wonder at the perfect symmetry of the line of products. Initially she’d been skeptical that the stack of numbers was all she needed to solve the x9 facts.

Then I gave her an option. She could either put the math facts into a minibook of her choosing as she’d done with the x8 facts, or she could write down the x9 pattern on a notebooking page.

I was pleasantly surprised that she chose to write rather than the rote activity. It was quite difficult to write the rule, and we had to work together to get it written clearly. But she did it. And day two, she still remembered her hack for solving the x9 facts.