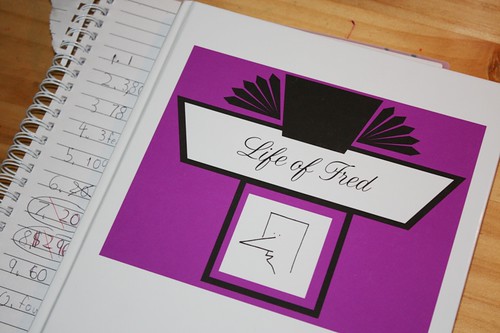 Life of Fred (LOF) is a living math book. It’s actually got a narrative story with math woven in. There are practice problems in the book (and answers), but it’s nothing like a math textbook I’ve ever seen. We are using Life of Fred – Fractions

, and my review here is based on that one title.

At the end of each of the 32 chapters is a set of ten (or fewer) questions. Between every four or five chapters, there is a Bridge with ten review problems. After completing 90% correctly, you can move on to the next chapters. But there are five different versions of the Bridge. So you get five tries to get it right.

So how did we get to Life of Fred? Actually, I first wrote this post in April of 2010. But we put LOF aside and are just now coming back to it. Here is the timeline for those who are wanting the nitty gritty of our math studies.

We had studied fractions quite a bit with hands-on activities up to three years ago. Then we tackled some other math topics such as positive and negative numbers. Then we came back to fractions and worked through plenty of exercises in Sprite’s Singapore Math books. All the hands-on activities were invaluable for her. That foundation served her really, really well when it came time to add, subtract, and multiply fractions on paper.

I felt like fractions was “done.” So my natural tendency was to rush on to a new topic, to get another area of the Singapore textbook marked off as complete. But I kept wondering if that was the right thing to do. Was getting through the list of topics my ultimate goal? No, not really.

So I got some input from the expert.  [grin]  I gave Sprite the choice. We could either move on to decimals (a brand new topic) or work on Life of Fred Fractions. She chose Fred. And my decision was made for me!

We did a few chapters of LOF; I wrote this original blog post. Then the frustration began to set in, so I had Sprite put LOF aside. It was about that time that we switched to Teaching Textbooks math curriculum. Sprite worked through the grade 5 material quickly (in her 6th grade year) since much of it was review.  We had a big move, so math, and all of homeschool, was put on the back burner for a while.

When we resumed school, Sprite finished up TT5, and moved on to TT6. She has done a few chapters with fractions in TT6, so I pulled out Fred for another try. Sprite admits that it is challenging, especially the way many of the problems are multi-step, but she is not as frustrated as she was a year ago. So the plan is to finish Fred Fractions before wrapping up TT6.

According to the author, the Fractions and Decimals & Percents books prepare a child for beginning Algebra. We will see how it works to prepare Sprite.  She is reading one chapter each day. I bought Life of Fred at Rainbow Resource.