Studying area is a great topic for comparing ways of teaching math. In the “old days” before my living math transformation, I would’ve breezed over the diagrams in the book as quickly as possible to get to the “real lesson” — the formula A= l x w so we can work the problems.

But not the new improved living math Jimmie. No, I now realize that jumping too quickly to an abstract, albeit simple, formula does not foster true mathematical comprehension.

So we learned about surface area the hands-on way

with lots and lots of squares. It seems that doing living math in our house requires lots of colored squares. (It’s a good thing that I have a real fetish for paper. I have all colors and thicknesses, so I’m never at a loss for something to cut up into manipulatives.)

Another great hands on tool was laminated graph paper and Vis-a-vis pens. We drew squares and irregular shapes and then counted the area and measured perimeter. We rolled a die for numbers of sides and then drew figures to see who could create the object with the longest perimeter or largest area. We marveled over shapes with identical areas but vastly different perimeters.

By the way, my favorite place for graph paper is Incompetech’s PDF generaotor which you can set to whatever size you want. We chose 1 centimeter squares and 1 inch squares.

Living Math Hint –One thing I’ve discovered is that the “game” aspect doesn’t have to be thoroughly planned out. Just spinning a spinner or dealing cards seems to make the math activity a lot more motivating.

I’m going to be honest with you. You and I know to multiply the number of rows and the number of columns to find out how many squares total. Well, I thought that would be painfully obvious to Sprite as well. But it was not immediately obvious to her. I let her count a gajillion squares until I tried to nudge her towards a simpler way than counting. It was still a bit hard to grasp. So do you know what I did? I stopped doing math that day before any frustration set in. And the NEXT day, we played a different game with the squares. She needed more experiences with the idea of area to really understand how length times width gives us the answer. And eventually she SAW the connection.

Later we used small boxes and traced all six sides onto the graph paper to determine, hands-on style, the surface area of a three -dimensional form.

Then we moved to circles a la lids. The green yarn was used to measure the circumference and diameter of each disc. 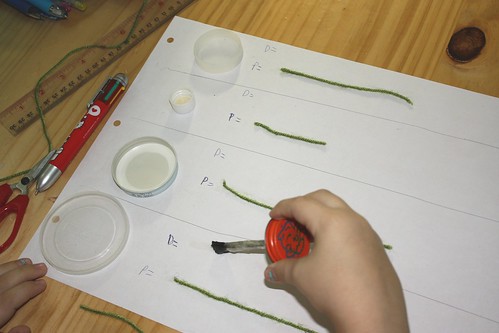 Can you see that Sprite’s page has P = in front of the strand of yarn? Yes, that means perimeter. I told her to measure the distance around and to mark it on her paper. She used the word she had learned previously. And why not? Circumference is just the perimeter of a circle, isn’t it? The technical word can wait.

This is living math in which we do not burden children with technical jargon unless the words are necessary or the child asks. Sprite asked me what to call the distance across the circle since she had no handy word for it. Thus she has D= on her paper for diameter.

Supposedly we could compare the ratios of the diameters and circumferences and get Pi, but I think our yarn was too stretchy and thus our figures were not accurate. So we left that for another lesson.