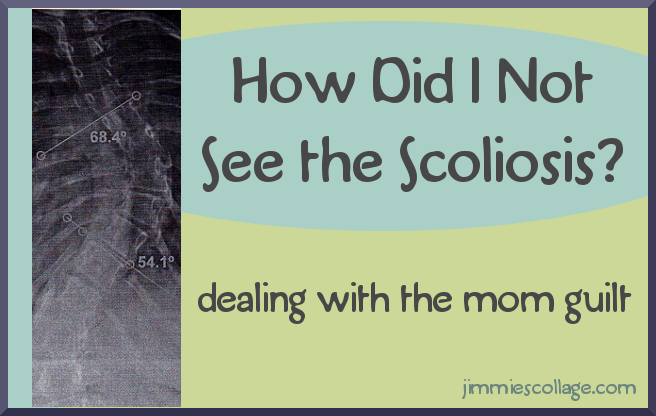 By the time we had a diagnosis, Emma’s curves were already at the point where surgery is recommended.

I was in utter shock when the orthopedic doctor handed me her x-rays. Why was there a snake arching across my daughter’s back?

That was my first thought — a snake had somehow found its way onto my daughter’s x-rays. Ridiculous. But so was the realization that her spine was bent into an almost symmetrical S curve.

How can you miss such a shockingly obvious deformity?

And yet I had missed it.

As the reality sunk into my heart and mind, I now realized why my daughter looked so off kilter and slouched in her posture.

And then the guilt set in.

What kind of mom am I? How do you not see what is right in front of you? I homeschool my child; I’m with her every day. Am I a bad mom? A negligent mom? An unobservant mom?

Friends were asking about braces and I was replying with news of surgery.

“What? So sudden? Talking about surgery right away?”

“Well, her curves are already to the point that surgery is recommended.”

“What do you mean? How did it happen so fast?”

It did happen pretty fast — within a year — but the truth is that I didn’t see it.

I’m not a nervous mom when it comes to health issues. I think a little dirt is good for you and that most ailments are cured by sleeping longer and drinking more. I don’t frequent the doctor’s office and don’t buy a lot of medicines. So I brushed off Emma’s back pain as normal “growing pains.”

I didn’t see the scoliosis because I wasn’t looking for it. My child is healthy. So why look for problems?

And then suddenly there is a huge problem in the black and white of a photocopied x-ray.

So on one side of my brain there is this huge load of guilt. And on the other hand there is reality.

Reality #1 There is nothing we could have done to stop the scoliosis. No, not even bracing.

Reality #2 None of us were emotionally able to handle yet another tragedy when we were expelled from China. Not knowing was a mercy from God.

Reality #3 We live in Memphis where there is an outstanding, nationally recognized children’s hospital —Le Bonheur — that does over a hundred pediatric spinal fusions a year.

Reality #4 Our surgeon called Emma’s scoliosis and her surgery “straightforward.” (The irony of using that word — straightforward.) It was the normal pattern for scoliosis and would require a very standard surgery that he is well equipped to perform. In other words, just another day at work for him. Her scoliosis was not strange, unheard of, difficult, or confusing to the medical staff.

So I told the guilt to go away. Goodbye. Not welcome to stick around or ever come back.

Any guilt I had was

Yet God had another gift for me to make sure the guilt never returned.

One of our many amazing nurses at Le Bonheur was Sandra* who routinely cares for kids after they have spinal fusions. During her 12 hour shift, we chatted as she came in and out of Emma’s room. Then she shared with me that two of her three children have scoliosis and even have the same orthopedic doctor that Emma has. Interesting coincidence.

But the blessing came when she explained how she did not see the scoliosis herself. Her pediatrician spotted it first.

God’s bullhorn was blaring. Here was an experienced RN who works with scoliosis patients daily. She did not see the problem in her own child.

And guess what? Sandra felt guilty about it.

It was one of those surreal moments when you are interacting with another person on the outside but in the spirit you are having a conversation with God. Actually it was more of an unspoken exchange.

I looked at God with wide eyes of amazement. He looked at me with a knowing smile and a gentle grin. 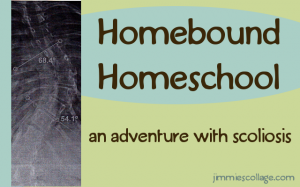 All Posts in This Series