Sprite is almost 10, and she had never taken a test of any kind until just last month. At that time, she was given the WISC in a one on one setting.

I wanted her to be tested for a couple of reasons. First to make sure that we’re on track with homeschooling. Not that a standardized test for reading and math can tell you all that you need to know about a child, but I felt that I wanted a bit of confirmation from an outside source to confirm our progress. I have the double whammy of having an only child added to our rather isolated location. I don’t have another child to compare her to — my own or anyone else’s for that matter.  (Yes, there are children here, but no American children who are bilingual, being raised in another country and being homeschooled. See? Hard to compare her to a local Chinese child on academic matters with those huge differences.)

Secondly, I wanted to give her some experience with test taking. I think she’s mature enough now that she can handle the pressure of a test and also handle whatever types of evaluations come from it.

I was pleasantly surprised that her scores were on or above grade level in every topic tested. Her reading and writing scores were GREAT, even several years above grade level. As expected, her math computation scores were lower than any other area with her writing topping out the whole pack. So, yes, we’re still working on the times 5 facts and telling time. No shame in that. Here I am, admitting it! 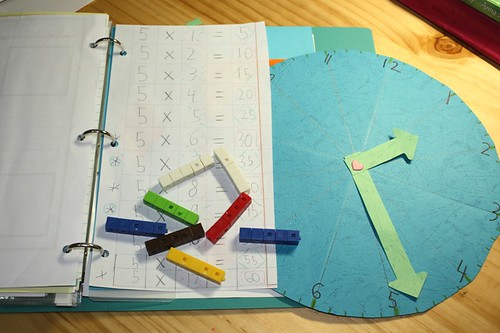 We keep plugging away with the arithmetic while we continue on with mathematical reasoning (on which she scored much, much higher than the computation). I don’t think it’s wise to stop everything else just to drill the math facts. So we’re adding more drill into our regular schedule, strengthening the weak as we build up the strong.

But to be honest, her computation score was right on grade level. So although the test confirmed my suspicions that arithmetic is not a great strength for Sprite, it also reassured me that she’s not behind in this area. And I’m okay with that. We all have areas where we excel and areas where we struggle. And we blossom at different rates, so these skills still have plenty time to grow. I feel confident that my new pathway for math — living math — is going to serve her well to continue her mathematical reasoning skills. If you’d like to know more about our shift in math learning, I’ve outlined it in detail at Transitioning to Living Math.

Life of Fred Fractions — I Am a Fan
10 Best Online Game Sites for Homeschool Math
How to Build a Straw Tower: Homeschool STEM Project