We’ve chosen Giuseppe Verdi as our composer of the term, and Verdi means opera!

I bought this opera DVD (pirated, shhhh….) for less than $2 —Verdi’s Il Trovatore , Metropolitan Opera (1988).   I have to admit, it was my first exposure, ever, to opera. And surprisingly, Sprite and I both liked it!

Granted, it’s totally different from anything we’d ever seen before. Of course there’s the BIG singing, the fancy costumes, and the stage set. We expected all that. What was new to us was the lack of action. The entire story is not just sung but told through song. I mean, when the two men duel, there is aggressive singing back and forth and then literally one strike with the sword and it’s over. The physical action is more symbolic than anything else. The words and the music are what tell the story.

I guess that I have probably read that somewhere about opera. But without seeing it, I just didn’t understand. Thank goodness for the (pirated) DVD recording. Without it, our understanding of opera would be quite deficient. Living books are good for most learning, but some things must be seen, touched, heard, and felt. Opera is obviously one of them.

Then we watched Verdi’s Otello (Othello), also by the Metropolitan Opera. This one was doubly good. First of all it was Shakespeare. (That means I checked off both Shakespeare and composer study in one fell swoop. Yes, I love marking things off my list!) Secondly it was much more engaging as far as action. The characters moved about on stage and physically interacted far more than our first opera.

Oh, the story of Othello is terribly sad, a true tragedy which the music accompaniment heightens considerably. And what a lesson about jealousy, about choosing friends carefully, and about open communication.  So it’s all a fabulous learning opportunity. Although the story was much darker, Sprite and I preferred Otello to Il Trovadore.

In true Charlotte Mason form, the focus is on the music, not the composer himself. So we’ve done nothing about Verdi the man yet, but I plan to let Sprite read this biographical sketch  at Lesson Snips.  We also have an audio CD about Verdi that we’ll listen to and take notes on. But for now, we’re enjoying the operas. We still have one more to go, Falstaff (based on a Shakespearean character).

If you want the nitty gritty, you can visit Giuseppe Verdi Composer Study where it’s all laid out in detail. (Notebooking pages and a minibook too.)

And here’s a simple lapbook we did about opera. I even made the minibooks into templates which I printed and gave to Sprite. This is not our usual way of creating a lapbook. But I believe in variety.

And all the printables for the minibooks can be found both on my HSLaunch page and on this Squidoo lens — Opera for Children (which links to the resources you need to fill in the minibooks).

Here are a few glimpses of a few of the minibooks. It’s a simple lapbook with only eight minibooks. And we did the whole thing in a week. That’s not our lapbooking norm either, but it’s good to make a quickie every now and then. My point was to reinforce the key aspects of opera, not to drag it out into a full length unit study. So this worked well. 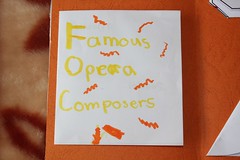 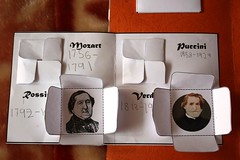 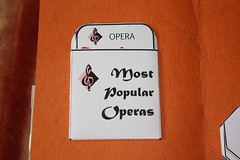 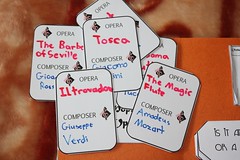 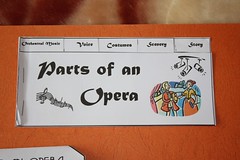 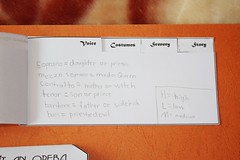