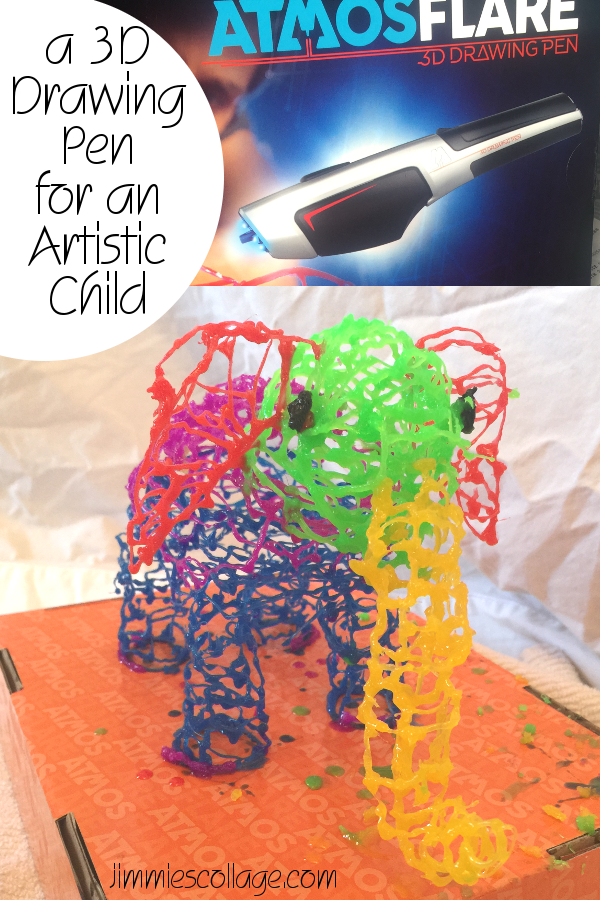 Disclosure: I received a free AtmosFlare 3D drawing pen and was compensated for my time in documenting this art activity.

My 16 year old daughter is quite gifted in art. She’s been studying it nearly all her life and is currently in AP level art classes at a local homeschool co-op. She was pretty excited to get her hands on this techy art gadget to see how it works. May I introduce the AtmosFlare 3D drawing pen. http://www.atmosflare3d.com 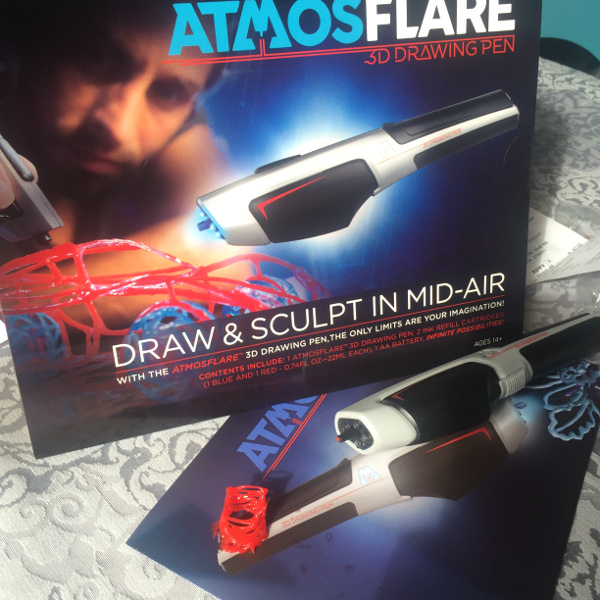 If you are like me, you have a hard time wrapping your head around 3D drawing. Well, just think sculpting. That’s what 3D drawing is — sculpting something in space from a special colored plastic that is extruded from a pen with a blue light on it. That’s it in a nutshell. After getting a feel for the pen and the ink, Emma decided to make an elephant. Here are a few photos and a time lapse video from the process. 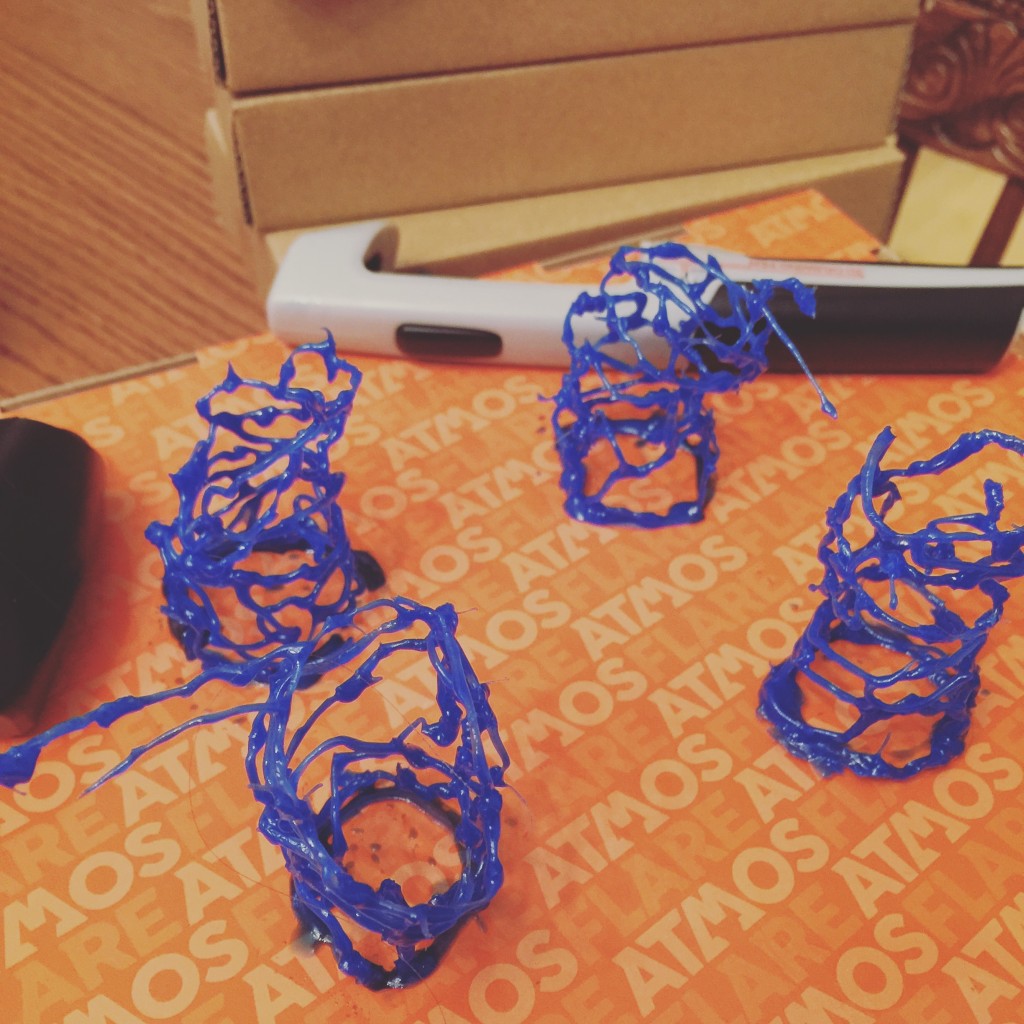 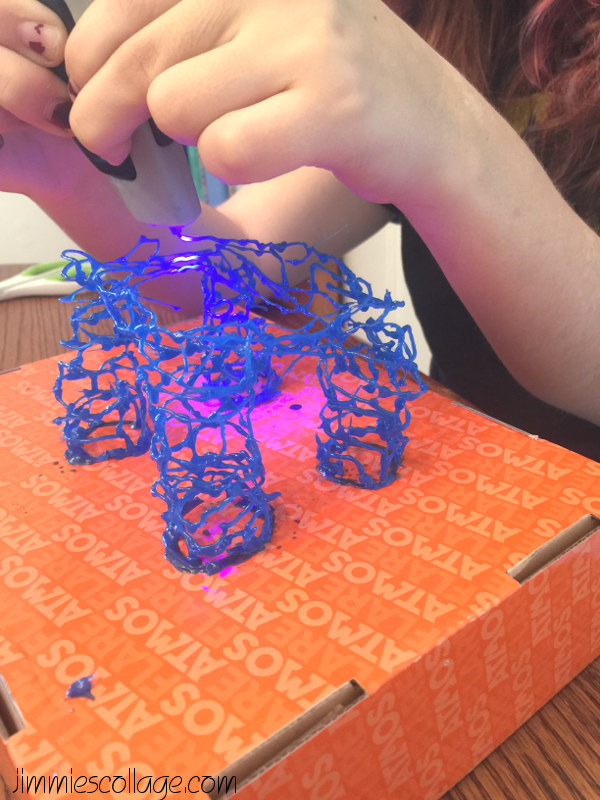 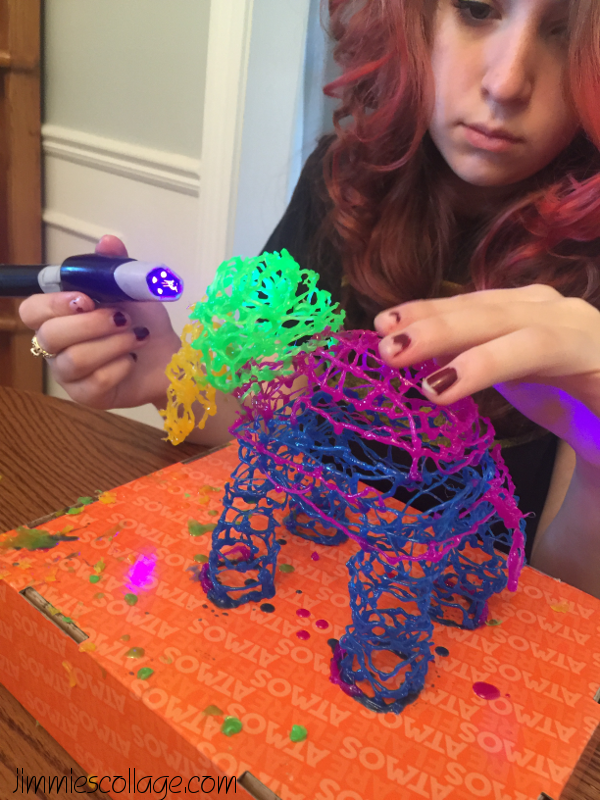 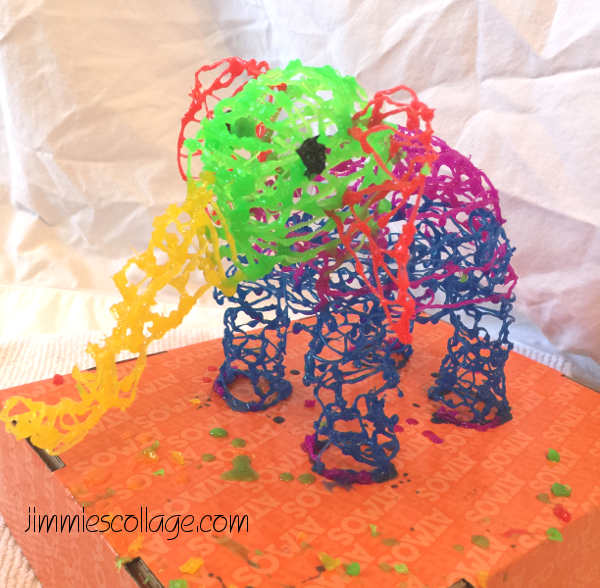 The time lapse video below starts with the legs already created. But you get to see the rest of the process through to the finished product. Emma says it took her 2 hours total to create.

The plastic ink that extrudes from the pen is sticky in an odd way. It’s not a sugary sticky but a plasticy sticky. Because it is impossible to create with the pen without touching the ink and getting sticky, be prepared for sticky hands. Soap and water will not cut the stickiness. You need something like Krud Kutter to clean hands and surfaces that have touched the ink. Similarly, the ink will make the surface you are working on sticky, so work on a piece of disposable paper, cardboard, wax paper. The material remains sticky long after creation. Emma’s first test items were still slightly sticky two weeks after creation. I assume that eventually the stickiness will wear off altogether, but I’ve not had it long enough to know.

EDITED TO ADD: Ah! I just discovered that the light on the pen is what hardens the plastic gel medium. So the way to cure the artwork and remove all stickiness is to simply set it in direct sunlight. We did this with Emma’s sticky elephant, and it is now hard plastic without a trace of residue!

One of my favorite crafting tips is to corral projects on baking trays. I either buy them cheap at the thrift store or use ones that are too burned or too scratched for kitchen use. This tip is especially important for the AtmosFlare 3D pen ink cartridges. When not in use, you should remove the ink cartridge from the pen and cap it. Well, as you might guess, it’s easy to lose those caps! Keeping the pen, the inks, the caps, and even your project all on a paper lined baking tray reduces the risk of losing things.

If your child truly wants to make something with the 3D pen, be sure to order a substantial amount of ink refills from the AtmosFlare site. The cartridges don’t last long, and when you factor in mistakes, trial and error, and getting acquainted with the medium, you are going to need a lot. If you are like me, you are spoiled with Amazon Prime’s 2 day shipping. So waiting a regular ship time for a creative supply is torture. Plan ahead or you may have a frustrated artist on your hands.

To give you a guideline, for the elephant you see here, an entire blue and an entire green cartridge were used. There was ink left in the other color cartridges.

I asked the resident artist what advice she would give other kids using the 3D pen in terms of creating artwork. 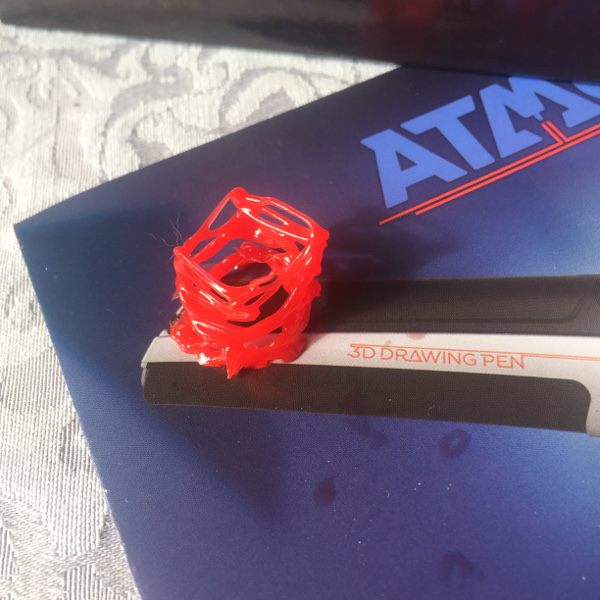 It’s best to create something you’re already familiar with in 3D. For example, Emma has already made an elephant sculpture from wire, so she had some experience with the shapes that make up the figure. If you haven’t ever made any 3D art, then start with some 3D object in your home to use as a model. Study it before you start. Looking at a 2D image might not work. Try to see and touch it in 3D or at least visualize it in 3D.

She says there are two ways to go about making a sculpture:

Either way, you have to break down the figure into its parts. You aren’t making an elephant in its entirety. You are making four tubes (legs) then a large oval (body), then a smaller circle (head), two disks (ears), etc. Learning how to draw what you see is a big part of art. It carries over into sculpture with a 3D pen, too.

Three Ways to Get Your Own AtmosFlare Pen

Obviously, you can purchase one! Go to their website, or try Amazon or BestBuy. Or you can enter to win an AtmosFlare pen in two ways below. 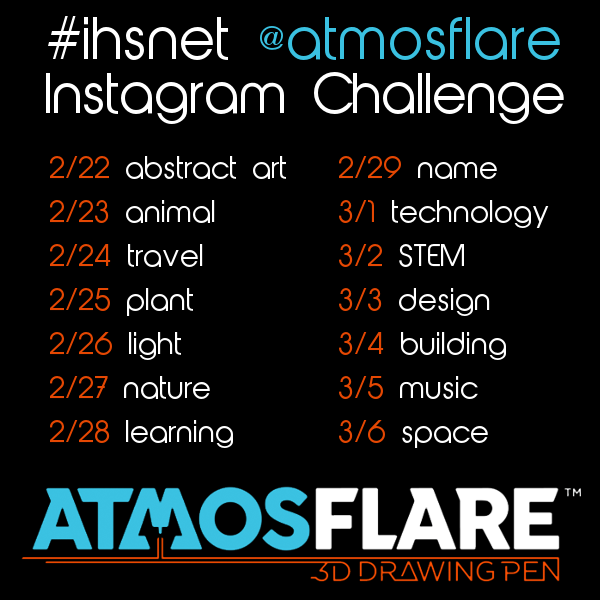