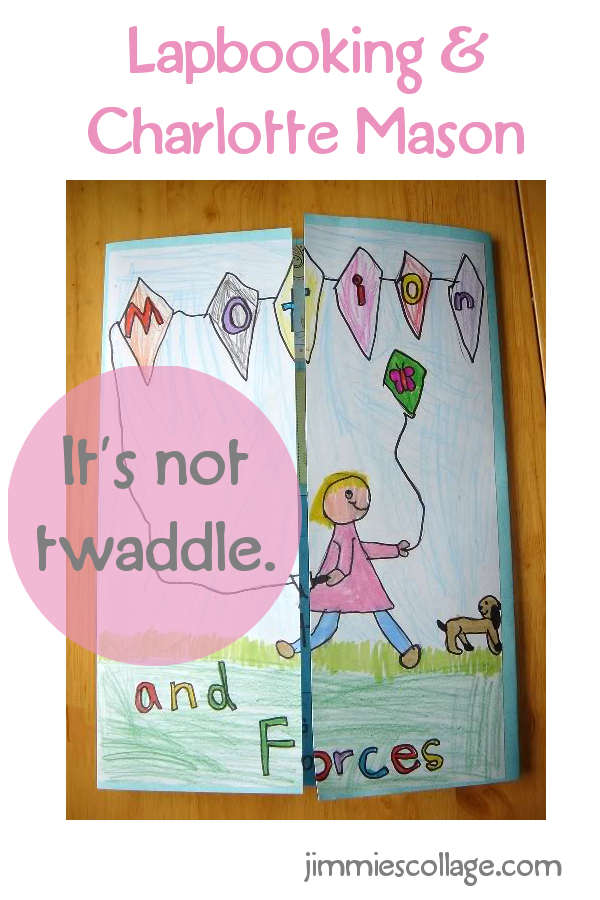 How does lapbooking fit into a Charlotte Mason homeschool?

When Miss Mason was alive, there was no such thing as “lapbooking.” Surely she was aware of the clever art of origami paper folding. But I doubt that her students used “hamburger” and “hotdog” folds to record their dictation each day.

So does that automatically mean that lapbooking is off limits to a CM educator? A purist may say yes, the CM homeschool has no room for such modern, frivolous pursuits as folding paper into clever shapes and drawing silly pictures. That’s a waste of time that could be spent memorizing French conjugations or exploring the anthills in the backyard.But for most of us, more eclectic CM “adapters,” lapbooking can fit in well with a CM philosophy.

Basically, lapbooking is a form of narration.

It’s a written and/or visual form of narrating back what was learned that day, that lesson, or that week. That’s exactly how we use lapbooking.

Didn’t Miss Mason encourage the use of journals and timelines (a book of centuries)? Aren’t lapbooks similar to those in many ways — paper documentation, often in visual form, of what was studied?

How does a minibook come about? I certainly have in mind what I think should be in the minibook, but my aim is to draw that out of my daughter. So I’ll ask a question like,

What she answers in response is her verbal narration. We usually hone it together before she puts it into the minibook, through some combination of writing and drawing.

Isn’t the verbal narration enough? Certainly it is. And sometimes we stop there. We don’t put everything we learn into a minibook. But my daughter is highly creative. She loves the artistic element of working with paper and markers. I am catering to her strengths through lapbooking and providing a record of her learning that she enjoys looking at again and again. I’ve discovered that she somehow needs to draw or move to express herself. She often grabs pencils as makeshift puppets to act out her narration or draws stick figures and maps on scrap paper to clarify it. I do require her to use words to express herself, but visual expression is also a valid form of demonstrating understanding. And for her, it seems to be her preferred style.

Could lapbooking simply be twaddle? Sure it could. In my opinion, many of the lapbooking kits that are for sale are basically glorified worksheets that require little thinking. Cut and paste, color a bit, and voila, you’ve made a lapbook. But if the creation of the minibook requires thought on the part of the student, then it is not meaningless.

If it’s a reflection of what the child has learned through living books and/or through direct observation, lapbooking has real value.

And then again, I do think that doing a rather empty lapbook kit is still superior to watching television or playing video games.
Here is an example of how we use CM and lapbooking  hand in hand.

We had been making minibooks during our four week study of motion and forces (a component within Noeo Physics 1). When it came time to assemble it all into the actual lapbook foundation, I told Sprite that she needed to create a cover image to represent what we learned about forces and motion (through our living books and experiments). When she was done, I had her explain how her drawing exemplified all we had learned. What follows is her narration.

Actually, she touched on the main points of our entire study including the three laws of motion, gravity, work, and friction.  I have to think that Charlotte Mason would be pleased.